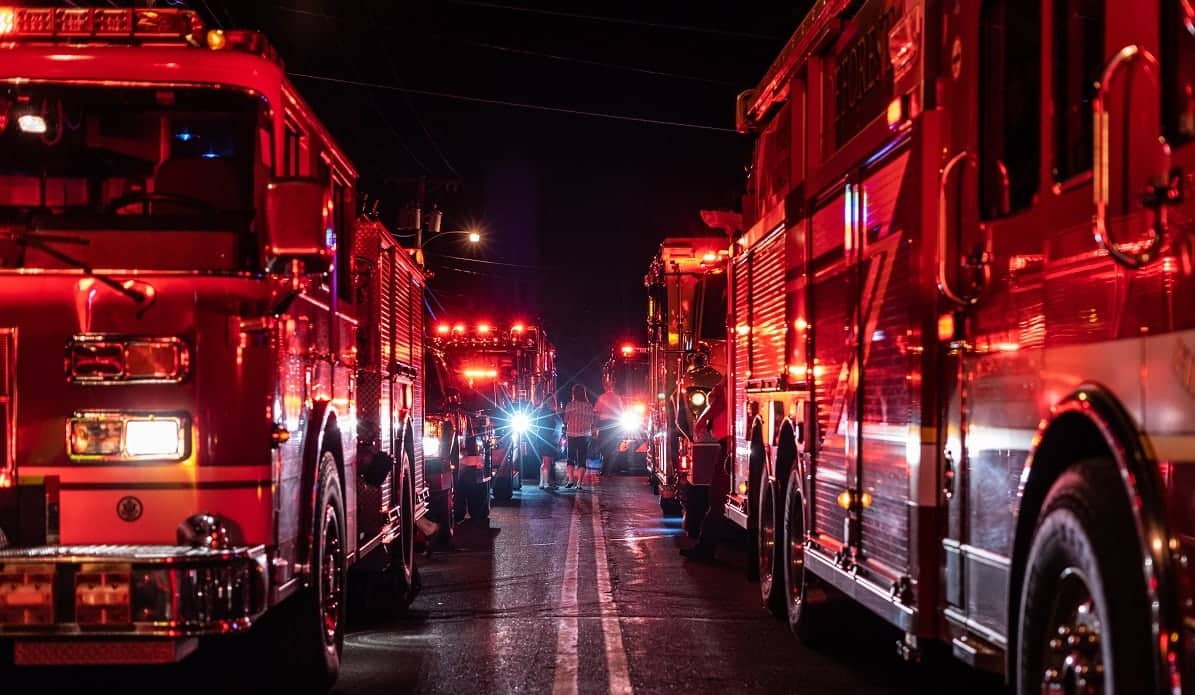 The basic function of emergency vehicle lights is to gain attention. Whether you’re at the scene of an accident or carrying a heavy load and you need to clear the way, the greater the chance of being seen the better, for everyone involved. That is why you need to understand that there are different types of lighting classes within LED technology that answer the question, “How do emergency lights work?,” and they are useful in different ways.

The two main classes of emergency lighting are broken down by using either (1) primary and secondary optics of LED lenses, reflectors, or TIR (total internal reflector) or (2) using a linear optic. Knowing what situations you will be using the lights for will greatly impact your purchasing and installation decisions. Each development has their own strengths and limitations.

To understand the effects of lighting and why you should upgrade to LED lights, you need to begin with LEDs themselves. LED stands for Light Emitting Diode. A diode is simply a semiconductor allowing the flow of energy in one direction only, and in the case of the LED, it emits light. The small protective dome over the diode in an LED bulb is the primary optic, whose function is to guide the output and create the shape of light coming from the small diode.

The light emanating from an LED with only the primary optic is mostly too broad for any focused use, as it loses its intensity over distance. For this reason, many LED light products are made with secondary LED lighting optics such as lenses, reflectors, or TIR optics. These all serve the function to collect the light from the diode and magnify its intensity towards the target.

Compared to an incandescent bulb which illuminates in 360 degrees, LEDs focus directionally, illuminating a maximum of 180 degrees. The way LEDs are constructed, there is a diode consisting of one or more die mounted on a heat-conducting surface. The primary optic cases the diode and reflects the light up to 180 degrees.

In an LED, the primary optic, or casing, is designed to create a certain spatial distribution, which is how much light is spread out from the center. Spatial distribution is measured out from the center point of your direction of light, so the greater the percentage, the wider the spread of the beam of the light. If an LED is rated 135 degrees, the light will fan out in 67.5 degrees on either side from center. But just because it is rated for 135 degrees doesn’t mean you will have an equal strength of light throughout the entire beam. In fact, you will lose lumen output as the light spreads out from the center. This is because the LED emits 100% of its relative luminous intensity along the center axis. The light will decrease intensity as it moves towards the sides of your beam of light. To reduce the loss of light further along the spectrum, a secondary optic is needed to intensify the brightness in the direction of focus from an LED.

A secondary optic is used in an LED setup to collimate the rays of light, which means to force them into a controlled, parallel beam that will bring full intensity to the area you need. Harnessing the rays in the same direction allows the light to be strongest along the center axis, giving you the most power supply where you need it. If you are stopped on a straight stretch of highway and want to get the attention of passing motorists, an LED light with well-designed secondary optics will offer the longest beam in any direction you point it. There are two common ways to design a secondary optic; with reflectors, or TIR optics.

Reflectors are the less expensive option of secondary LED optics, as they cost less to manufacture than TIR. Although they have their limitations, they are easily implemented and can sometimes be used to add different luminous filters or even diffuse light from the light source. How well they collimate the light beam varies by the shape and the texture of each reflector. Yet the actual size of the light source can often limit the optical options and the majority of light rays emitting from the center pass out of the framework without even touching the reflector. Even with a narrow reflective system, this means that a considerable amount of light escapes wide of the target, and results in lost lumen output and sometimes creates an unwanted glare.

With the improvements to higher LED emitters, a system was needed to collimate the light in a tighter, more direct beam toward the target, eliminating as much luminous waste as possible. TIR lenses or optics were introduced to create a narrow light output that projects light a great distance at a great intensity and suffers minimal glare.

Similar in terms of application to a flashlight, the diode is centered at the tip of a cone-shaped reflector. The reflector captures all the scattered light and focuses it forward toward the target. Like the beam of a flashlight in the dark, the TIR optic design creates a long and narrow trajectory of light. To spread the beam over a wider area, vertical ridges on the outside of the lens spread the light over the horizontal axis. For the most part, this area only covers about 30-50 degrees of maximum intensity; then the luminosity drops off significantly. The signal may still be visible, but the effectiveness of your warning light is considerably diminished. You basically have a very powerful signal in a narrow, far-reaching band of light, and very poor off-axis visibility.

One last thing to remember is that the ratio of the size of an LED to the size of the optic will determine the beam angle. What this means is that if you want a narrow beam from your LED, this will require a smaller emitter or larger optic. Smaller emitters will limit the output of the LED, while larger optics will push the limits of the injection molded inside the reflector.

Chip On Board (COB) offer many advantages over the standard LED setup. Basically, the COB consists of multiple LEDs bonded directly to a substrate to form a singular module. The individual chips can be mounted in such a way that they take up less space and emit the greatest potential the LED chip has to offer. This differs from the traditional setup, as when they are energized, it appears more like a lighting panel than multiple individual lights.

Because it is packaged with multiple chips, the light emitted from a COB system will result in greater intensity and lumen output per square inch. Fewer components are required for each LED chip, as a single circuit with just two contacts is needed to energize the multiple diode chips it houses. By reducing components and eliminating the traditional LED chip structure packaging, the device can even lower the heat output generated from each LED chip.

Another benefit of COB LEDs is that spot soldering of the individual LED chips is not necessary as each chip is mounted directly onto the substrate. The less welding points needed results in a lower rate of failure.

Often an issue with LEDs, light loss is reduced significantly with COB LEDs and the viewing angle can be increased as lenses and other traditional LED packaging parts are no longer needed and omitted from the design.

If your LED lighting setup or needs require the maximum forward intensity of light (as on a straight stretch of highway), TIR designed optics, which include COB technology, are your best bet. But what happens if you are stopped at an intersection? Or if your emergency vehicle is needed to park at an angle to oncoming traffic? With a horizontal spread of only about 40 degrees, TIR lenses greatly reduce your side visibility. In these and other situations, you will need a solution to emit light with greater spatial distribution to warn or attract subjects off of a centered angle.

If you need to broaden the scope of your signal along the horizontal axis, linear optic technology will provide you with linear light that can be seen from almost any point along the spectrum. This is done by surrounding all of the LEDs with an optical reflector that captures the light from all the LEDs as opposed to capturing light from each single LED in the TIR design. Also, the collimator is removed, as a single narrow focus of light is no longer the objective. The design is replaced by a smooth lens on the surface and an oval-shaped reflector around all of the available LEDs.

This design creates a system where linear light is aligned to focus on a narrow horizontal plane at a very wide angle. Some linear optics can reach visibility up to 180 degrees of spread, making them very desirable in off-angle applications.

The downside of linear optic technology is that by spreading the light over a wider area than the TIR, it loses its strength of signal over distance. As a result, the signal won’t be seen until a subject is closer than if you were to use a TIR based light. Also, because this type of optic creates a larger light spread, it uses more energy. A TIR unit will be stronger than a linear light with the same number of LEDs and equal wattage.

Linear optics work well in many situations as the beam can be seen from almost any direction the light is facing. Emergency, utility, construction, or other vehicles that utilize emergency lighting that will be at risk on city streets or near dangerous intersections will find that linear optics will work best to ensure their signal is seen. Linear lights in the front and back of the vehicle provide visibility at a wider angle, and adding linear surface mount lights along the side of the vehicle will increase visibility from the side even more.

Many manufacturers are using polycarbonate in their lighting products today. Polycarbonate is a flexible plastic that can be molded into thin diffusion lenses with 90% clarity and purity. Using polycarbonate enhances performance by transmitting light at maximum efficiency in virtually all light applications.

Using highly transparent resins, designers can actually shape the light output because of the extreme plasticity of the material. Unlike fragile and inflexible glass and acrylic, polycarbonate can be used to create shatterproof lenses, housings, and coverings, giving it superior impact performance and design flexibility, without losing any transparency. It can be made to shine the LED light in a direct beam as in a TIR system, or it can refract light in linear form.

Which lighting system will work for you?

To decide which type of lights you will need, you will have to consider their specific purpose. How will your light be used? Where will it be placed or mounted? What do you want to achieve with the light? These and other questions should be considered to achieve maximum usability and functionality. Armed with the knowledge of how the technology of lighting systems work, you should have a better understanding of how you can utilize this information to make lighting choices that suit your needs.

Why not implement both? For many applications, a combination of TIR and linear optic lights provide a vehicle with the highest exposure, and allows the driver to feel confident he will be seen in almost any situation. After all, safety is the number one priority for both you and the other motorists when you are using emergency warning lights.

For any questions, comments, and/or concerns you may have about LED Optics for emergency lighting, feel free to contact us. The professionals at LED Equipped are here to help.