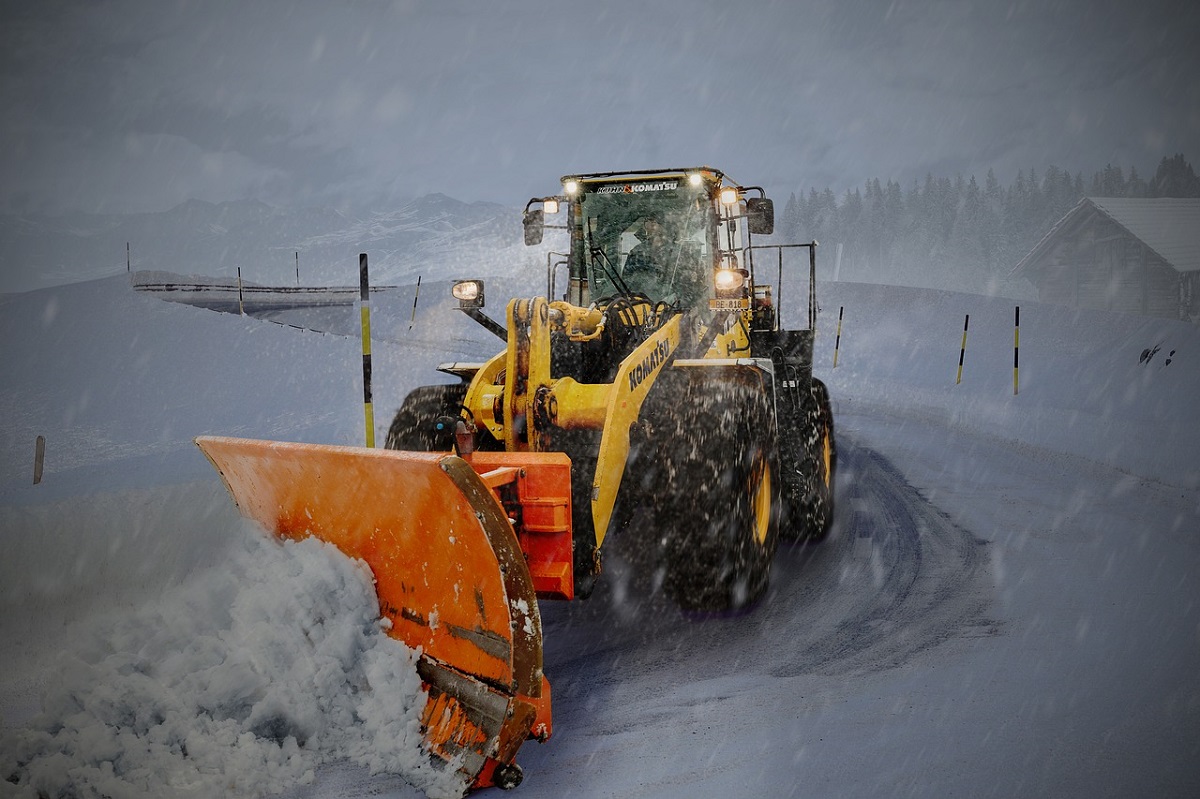 Snow plow vehicles operate in extreme weather conditions and require high-performance systems in many areas of the vehicle to accommodate the unique demands on the machine. Just as the mechanical, drivetrain, traction, and other systems must be adequately upgraded for the rugged use of snow plowing, so must the plow’s lighting system. In this comprehensive guide, we will provide you with all the information you need to know about snow plow lights for trucks, including the best lights for snow driving and the different types of lights that snow plows need to be equipped with. Read on for more information!

What Are The Unique Needs of Snowplows When it Comes to Lighting?

Snow plows do not just need to be equipped with the best LED lights for snow plowing. They also must be made visible to other vehicles during white-out conditions and when longer stopping distances might be necessary due to slippery roadways. Therefore, we can categorize snow plow lights into two major categories: Lights which help the snow plow operator see the roadway more clearly, and lights which help to make the snow plow itself more visible to other drivers on the road. This may seem relatively straight-forward, but with virtually endless mounting configurations and available types of lighting, things can quickly become complicated.

The fact is, not all snow plow lighting configurations are created equal. In many areas, poor lighting configurations can be attributed to many accidents every winter, some of which involve serious injuries and even death. Since snow plows travel down roadways at lower speeds than other traffic, collisions are imminent in winter conditions without proper lighting. For this reason, it is imperative that anyone who is outfitting a snow plow with lighting is well-informed on the best lights and how to configure them properly. It is quite literally a matter of life and death.

One of the primary lighting needs of snow plows is to provide a clearly lit roadway so that the snow plow operator can see where the plow is going. Ever since the very first vehicle was invented over one hundred years ago, incandescent bulbs have been used for headlights. However, over the past twenty years or so, advancements in lighting technology have resulted in new types of vehicle headlights gaining popularity. Halogen, high-intensity discharge (HID), and light emitting diode (LED) bulbs are becoming more and more popular. Light-emitting diode bulbs, in particular, are beginning to emerge as the new standard due to their high energy efficiency, unparalleled brightness, and long service life. If lighting trends continue on their current track, we will soon see LED headlamps and auxiliary headlamps become the most popular option for snow plow lighting.

One of the major drawbacks of using light emitting diode lights for auxiliary headlights on snow plows is that unlike high-intensity diode lights and halogen bulbs, they do not emit a lot of heat while illuminated. In normal driving conditions, this would not be such a concern, but when it comes to the demands of snow plow driving conditions, we can see how snow building up on auxiliary headlights due to a lack of heat could be a big issue.

Fortunately, there are technologies available to tackle this issue so that snow plows can still benefit from all the advantages of LED lighting. Heated lenses are one such technology. Heated lenses often operate using an in-cabin switch so that drivers can choose when they are necessary. Another method is to use a heated mesh wiring that is applied over the headlamp lens. Finally, simply spraying the lens with cooking spray can be enough to prevent the build-up of snow and ice over the bulb. Thanks to these innovations, LED auxiliary headlights are a completely viable option for snow plows.

During heavy snow, especially when the flakes are particularly large, light reflection and light scatter are major concerns for snow plow headlights and auxiliary headlamps. When the light from the beams hits the snowflakes, which have a reflecting quality, it can be reflected back towards the snow plow operated or scattered in multiple directions. This can be extremely dangerous, but with proper mounting technique and headlight selection, it is avoidable.

Both the width of the headlight beam, and the position they are mounted in, factor significantly into minimizing light reflection and scattering. The two most effective ways to prevent these effects are to mount auxiliary headlights far away from the vehicle operator’s line of sight and to use narrower beamed headlights. In fact, many snow plows utilize only a single auxiliary headlight, mounted on the passenger side, with a narrow beam. These are the best lights for driving in snow. By using an adequately bright LED headlight, this mounting technique can still provide enough light for safe operation in extreme driving conditions.

In addition to light reflection from falling snow, blowing snow created by the plow itself can also produce this effect. To prevent this occurrence, plows must be equipped with deflectors that attach to the top of the plow. Such deflectors are adequately effective in preventing too much blowing snow from the plow obstructing the view of the plow operator.

The other major type of snow plow lighting is warning lighting, which functions to alert other drivers and pedestrians of the plow’s presence and its trajectory. Just as LED light sources are quickly taking over the auxiliary headlight market, they are also the preferred type of lighting when it comes to snow plow warning lights. Snow removal agencies and private plow operators prefer LED light systems because of the myriad of benefits that they offer. Among these benefits are longer lifespan and, as a result, reduced maintenance costs, increased brightness and a resulting increase in visibility, and increased energy efficiency. Most snow plows feature LED warning lights on the sides, front, and rear of the plow vehicle.

While there is a direct correlation between snow plows that are equipped with bright warning lights on all sides and a reduction in the number of accidents that such plows are involved in, there is no consensus when it comes to the optimal color for such lights. Some state-run departments of transportation utilize white lights on all their plows, many employ a combination of amber and blue lights, and others use green or red LED warning lights. While no studies have shown conclusive evidence that a single color is more effective in preventing accidents than another, one convincing theory argues that using a unique color for snow plow lights could be safer. This argument is based on the idea that it is safer to differentiate snow plows from other trucks by using a different color of warning light. This way, motorists can easily identify the snow plow from a distance and take necessary precautions.

The safest snow plows employ a combination of both flashing and steady-burning warning lights around the perimeter of the vehicle. Each of these lights serves a different warning function to motorists on the road.

Flashing lights serve the important purpose of notifying motorists of the snow plow’s presence. As you might guess, a flashing light is great at getting the attention of drivers and creating an initial awareness that the plow is in their vicinity.

Lights that are constantly illuminated, on the other hand, have a different purpose. These lights allow drivers to determine the relative speed and trajectory of the plow, once they are aware of it. Both types of lights are elemental parts of an effective snow plow lighting system.

Especially when it comes to larger plows, the position of such warning lights is quite important as well. For example, on a snow plow that is 13 feet tall, if the only rear warning lights are positioned at the top of the vehicle, most smaller cars will no longer be able to see these lights when they are too close to the plow. To tackle this potential issue, lights should be mounted not only on all sides of the plow vehicle, but also in both low and high positions. In particular, it is most important to have flashing warning lights positioned higher on the vehicle, and constant-burn lights lower.

So, you’ve read this article, and you are feeling confident in how to choose and properly mount your new snow plow lights. But what happens when you are operating the plow in a heavy, wet snowstorm, and snow begins to build up on the lights? This can happen quickly and is one of the major safety concerns for snow plows. Keeping lights clear is just as important as choosing the right ones and mounting them correctly. In this section, we will outline the popular methods for keeping snow plow headlights and warning lights clear of snow.

Another option for keeping plow lights clear of snow and ice is the use of a heated lens. These powered lenses can use the same 12-volt power source as the lights themselves and are quite effective in melting snow and ice that could otherwise build up on the lens. It is very critical for plow operators to have access to a switch for heated lenses because in some types of snow (colder, lighter snow) there is not a risk of it building up on the lights. In fact, operating a heated lens in colder snow conditions could lead to an increase of ice over the lens. However, in warmer, stickier snow, they are very effective.

The final method for keeping lights clear of snow is to position them so that they get more air flow to blow the snow off of the lights. Some snow plows have entire apparatuses built to mount lights in a way that prevents snow from building up on them. These structures are called telespars and have been proven to be highly effective in keeping lights clear of snow, but they do tend to increase the overall height of the plow vehicle.

Now that you know the essentials of how to choose snow plow lighting, be sure to check out LED Equipped’s Snow Plow Lighting section. We offer top quality LED lighting solutions for snow plows at great prices. Thanks for reading!